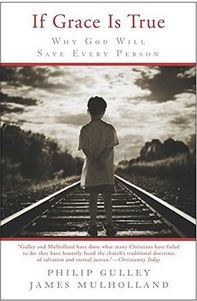 n discussing some theological perspectives with an old, retired Mennonite pastor friend of mine, he mentioned to me that he had seen things in more or less conventional Christian terms until he read “If Grace Is True” by Phillip Gulley and James Mulholland.

Now this friend is not just any pastor.  He has that rare sweetness of spirit and penetrating concern for the spiritual well-being of those around him that sets him well apart from your average pastor.  If you’re not used to interacting with deeply spiritual people, encountering a person like him can be more than a little intimidating.  There are so few that are so completely in Christ.  It’s just unfortunate that there aren’t more totally sold out disciples out there to model Christlikeness for the rest of us.  We need more mystics!

So given his commendation of this particular book as the work that fundamentally changed his thinking about God things, I knew I had to read it. This is a summary of what I found.

The authors of “If Grace Is True”, friends since their Seminary days, argue for Universalism – the view that God “saves” everyone.  Given the millennia of orthodox Christian teaching, the testimony of the Bible itself, and the overwhelming rejection of this view by the vast majority of those calling themselves Christian, convincing the reader that God saves everybody is no easy job.

They do a reasonable, though unconvincing, job of it.  Beginning with an anecdote involving a woman on the verge of suicide, they lead the reader through some life experiences that led them to their belief.  Both (the book is written in a single voice, so you don’t know which author had which experience) indicate that they didn’t always subscribe to Universalism.  They began their ministries accepting the orthodox story: God only saves those who profess faith in and follow His sacrificial Son, Jesus.  But their experiences in ministry convinced them that this orthodoxy was wrong.  Theirs wasn’t an intellectual determination.  The change in their belief was the result of a few strongly emotional experiences with some of those to whom they ministered, and a telling willingness to dismiss the Bible virtually wholesale.

Along the way they make some valid points.  For example, they point out that some people have negative experiences in the churches they attend, particularly those of the “fire and brimstone” variety, and consequently develop anti-God bias.  Of course this is true.  Fundamentalist-oriented churches in particular can display quite un-Christ-like behaviors of judgement and rejection of their parishioners, sometimes causing deep, lasting wounds to these would-be believers in a gracious Lord.

But from such observations they hope the reader will accept their conclusion that these churches are somehow mirroring the character of a fraudulent God, the one revealed in the Bible’s Old Testament.  Repeatedly they inform us that this isn’t the God of Jesus Christ.

They make the contrast between the wrathful God sometimes described in the Old Testament, and the more gracious, more loving Jesus as their proof that the Bible is mistaken in its persistent characterization of Him as righteous and vengeful against those of whom He doesn’t approve – those who don’t seek Him.  Certainly this contrast in characters has caused great confusion over the centuries among new believers seeking to rationalize the pre-Christ God with the Christ God.  The authors’ response is to completely reject God’s holiness and righteousness, seeing it to be at odds with Jesus’ admonition, in response to the OT’s “eye for an eye” in Leviticus, “But I say to you, Do not resist the one who is evil. But if anyone slaps you on the right cheek, turn to him the other also.” of Matthew.  To them, this shows two different Gods: one false and one true.

It is unfortunate that the authors’ allow their very human conclusions to dismiss all but their preferred verses of the Bible.  It does no one any good to sell a non-Biblical scenario for salvation that claims much of the Bible is false.  Such an approach serves only to allow our human emotions and limited understanding of God’s righteousness and holiness full sway in discrediting the only attested and vetted source of knowledge we have concerning God and His relationship with us, His creation.

Unfortunate, also, is their pat dismissal of some of the major themes of the Bible: sin (no explanation), faith in God as a prerequisite for enjoying the blessing of His covenant, Jesus as the necessary resolution to humanity’s sinful state, and the presence and mission of the Holy Spirit.  Most of these topics receive little, if any, mention.  Jesus is offered as a demonstration of God’s grace – to help us see it.  Nothing more.  The gospel message of receiving Christ in faith is absent.  To them, as they repeatedly underscore, you don’t have to do or believe or change anything about your life to obtain God’s blessing.  God’s “grace” will win everyone in the end, they say, either in this life or the next.

In the final analysis whether or not you are persuaded by the authors’ argument depends on the extent to which you not only believe the Bible’s veracity, but have spent enough time reading and studying it to understand and accept its major themes – justification by faith being paramount among them starting with father Abraham.  If you haven’t spent enough time with its teachings to understand these things, and see their consistency throughout, you are unfortunately possibly gullible enough to be swayed by this appeal to universal salvation, which completely discounts anyone’s belief in or commitment to the gracious One doing the saving.

Belief in Biblical “inerrancy” isn’t the reason people hold (supposedly incorrectly) to its teaching, as they allege.  If you only understand in general what the Bible teaches and believe it, you can’t also believe their story. If you’re looking for an explanation for the Creation, human life, and why you’re here, you won’t find it here.  What you will find, as in many places these days, is a philosophy of God informed by human experience, with a few Biblical verses sympathetic to this philosophy sprinkled in along the way.  Why the authors see fit to cite any verses, given their premise that the Bible is an unreliable source, is never addressed.

These authors claim to be “Christian” Pastors.  Proceed at your own risk.